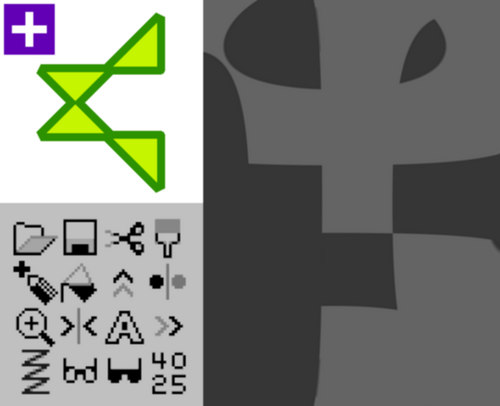 NB. THE FREE EDITION OF THE SOFTWARE IS DERIVED FROM THE LATEST PRO EDITION JUST BE AWARE THAT SOME ITEMS
MENTIONED IN THIS LIST MAY ONLY BE AVAILABLE IN THE PRO EDITION!!!

- Fixed: There was a problem with the selected range after a cut/delete.

- Fixed: Export All (Binary) - There was a bug in the code that handles the folder history file.

- Fixed: Open Project (CTM4) - There was a bug causing the char colours to not be set properly/entirely.

- Fixed: Open Project (CTM2) - There was a bug causing a crash when reading a project using a 1x1 tile-set.

- Fixed: There was a problem with using the space-bar shortcut for map panning (multiple toolbar buttons checked).

- Fixed: There was a problem with using the space-bar shortcut for map panning (random jumping).

- Fixed: Copy/Paste between program instances was not working properly - it only worked for the first copy/paste.

- Fixed: Toolbar buttons - it was possible to deselect all.

- Changed: Major rewrite of the tile editing library to simplify things behind the scenes.

- Changed: Shortcuts for all 'Negative' ops changed to CTRL+SHIFT+N, CTRL+I seemed to be having some issues.

- Changed: Tile name/tag fields removed from the main toolbar and put back in the tile editor (a Thalamus Digital request).

- Fixed: Map Editor - Text Entry - the highlighted area was not following the cursor.

- Added: Tile Editor/Set - Scroll Up/ Down/ Left/ Right with SHIFT key held to scroll the tile(s) cells, not the pixel data.

- Changed: Tile Name and Tile Tag fields have been moved from the Tile Editor to the main form's tool bar and can now also
be used by the Tile Set form.

- Changed: Tile Cut/Copy/Paste shortcut keys have been changed to CTRL+X, CTRL+C, CTRL+V.
nb. They were using ALT due to some conflicts with the textbox shortcuts, these are now resolved.

- Fixed: There was a bug in the code that handles copy/paste between program instances.
(After using Copy it was not possible to change ie. the map dimensions).

- Changed: Made a few of the toolbar icons a bit clearer.

- Added: Improved graphics in the 'About Box'.

- Changed: Version number forwarded to 2.6 to better reflect the amount of work since the last public release.

- Fixed: There was a problem (crash) when when cancelling the image import dialog.

- Changed: The 'View' menu can now be used to hide forms as well as show/select them.

- Changed: A few changes to the 'About Box' text etc.

- Changed: Tile names can now be up to 32 characters in length.

- Changed: The icon/logo for CharPad "Thalamus" Edition has been re-coloured to distinguish it from the standard version.

nb. you may need to close explorer, open a command line (cmd.exe) and "del /a iconcache.db"
from "C:\Users\UserName\AppData\Local" and open a new explorer (explorer.exe) to see the change.
nb. you can hit "CTRL+ALT+DEL" then choose "Start Task Manager" to begin this process (Windows 7).

- Fixed: The current tile name/tag was being copied to all selected when cycling back/forward.

- Added: A few of the old fonts have been brought into "keymap compliance" and included.

- Changed: Most of the (tiled) Subchrist examples now include tile names.

- Fixed: There was a problem with the tile naming feature not processing the backspace/delete keys properly.

- Fixed: There was a problem with the tile tagging feature also changing the names of all selected tiles.

- Fixed: There was a problem with the project palette showing the wrong char colour when using "per-tile" coloured tiles.

- Changed: Tile Editor - Any changes to the tile name/tag are now applied to the selected range.

- Fixed: Image import - The selected image file was not being released after use.

- Fixed: Map editor - There was a problem with the scroll position after maximizing the window.

- Fixed: Compress/Decompress - There was a problem when decompressing non-square tiles.

- Fixed: Form update timer was running too slowly, repeating ops such as Prev/Next should be smoother now.

- Added: Map editor - Tile name and tag info in the status bar (all tools apart from Pan and Text Entry).

- Added: Help Files - Updated form documentation with some of the new features.

- Fixed: Map editor - Form was not updating properly after some ops that affect map size.

- Fixed: Map editor (text entry) - RETURN was not working if used on the bottom row.

- Fixed: Tile editor was not painting with the "space" char on RIGHT mouse button.

- Added: Tile Set now shows the name and tag value of the tile under the cursor (in the status bar).

- Added: Assignment of a "space" char/tile is now automatic when a Key Map is selected (Project Palette).
nb. As long as a char/tile of the required value exists in the project.

- Added: Map editor - The DELETE key now drags text from the right of the cursor (same row only).

- Fixed: CTM v4 projects that use (compressed) 1x1 tiles were having some problems loading/converting.

- Added: Maps now contain a variable 'space' value that can change depending on the current key-char map.
This will affect how text is deleted, cleared, cut etc and also what the mouse paints when the
RIGHT mouse button is used.

- Fixed: Tile names/tags were resetting to defaults when tile dimensions were resized.

- Changed: "Clear" op keyboard shortcut for char, tile and map editors is now CTRL + DEL (DEL alone was interfering with string input).
nb. this op shortcut is now the same for all windows, DEL alone is only used to delete from char/tile sets.

- Fixed: There was a problem when loading CTM V4 files that use a 1x1 tile-set and per tile colouring, such files are now properly converted to tile-less/per-char colouring.

- Fixed: There was a problem causing crashes when copying tiles larger than 5x5.

- Fixed: There was a problem causing crashes when importing map data that was smaller than the current map dimensions.

- Fixed: There were some issues with window positioning when the program was not maximized.

- Fixed: There were some issues causing crashes when de-tiling/re-tiling large maps to use smaller tiles (ie. Turrican/Rambo).

- Added: Character and tile editors now display the numbers of the current items.

- Added: 'Paste Append' for char/tile set (simplifies pasting chars/tiles to the very end of a set).

- Added: Warnings about tile size mismatches when copying/pasting between projects.

- Added: Warnings when decompression is not possible due to excessive chars required (>65536).

- Added: Warnings on tile and map data exports about possible value clipping when a project contains more than 256 chars or tiles.
Exported binaries store only only 8-bit data.

- Added: Warning/correction when pasting map data with references not valid for the curent project.

- Added: 'Reflect Left to Right' and 'Reflect Top to Bottom' for map data.

- Added: Scroll, Flip and Reflect operations for only the selected map area (when the Selection tool is enabled).

- Added: A few additions and tweaks to the examples.

- Added: A folder of examples kindly donated by Saul Cross.

- Changed: Complete code translation from C++/DotNet to C#/DotNet, a number of potential problems were exposed and fixed during translation and a great many improvements have been made to the program's internals.
The switch to C# may also improve compatibility with 'Mono' for non-Windows operating systems?

- Changed: The default (new) project is now an un-tiled one.

- Changed: When a project's tile system gets enabled, all child forms are now displayed.

- Changed: Duplicate tiles are now automatically removed when the tile system gets enabled.

- Changed: Smoothing of the tile-set and map images is now off by default.

- Changed: Menu and toolbar (main form) are now dynamic, available items will depend on which child form is active.

- Changed: 'Cut' for char/tile editors has been removed (it's operations (clear/copy) are still available).